While Oakland is home to hundreds of bars that serve craft beer, today we’re just going to focus on bars that specialize in beer. If you feel like I may have missed your favorite beer bar (I doubt it), let me know in the comments. Okay ready? Here we go.

I had such high hopes for this place. Not only is it right down the street my apartment, but this 40+ tap beer garden is also home to a fully operational bowling alley, bocce ball court and more flat screen TVs than than you can shake a stick at. So why is it so low on the list? The service. This place is horribly understaffed is marred with incompetent servers and annoying bartenders. But don’t take my word for it – take a gander at their Yelp page.

Pacific Coast is one of the few beer bars in Oakland that actually makes their own beer, which is rad. Unfortunately their house beers are not my favorite (the IPA is pretty decent). Don’t worry – they make up for it with their crazy spicy buffalo wings, friendly staff, and amazingly curated guest tap list. Also, the Brainstormer Trivia Nights on Tuesdays are just way too much fun to pass up.

The Hatch, a hole-in-the-wall bar located right next to Hi-Life in Downtown Oakland, is very very small. What it lacks in size it makes up for it with pretty hard to find beers on tap (like Golden Road’s Wolf Among Weeds IPA) and amazing bacon-wrapped hot dogs. The Hatch is also home to a Abura-Ya Japanese Fried Chicken pop-up for the lunch crowd during the week, if you’re into that kind of thing.

Oakland’s Independent Brewing Company is what you might call a nanobrewery. Located in the warehouse district of Jack London, Independent Brewing does not look like much from the outside. But like most things – it’s what’s on the inside that counts. Luckily, their beers do not disappoint. If you can, take a tour of the place and try some favorites such as their Kolchy-Kolch or the Pipe City Pale Ale.

While Cato’s location is a bit far from where I live, it’s totally worth the 6 dollar Uber cab to get there. Not only is the food amazing (the spiced Catatoe’s come heavily recommended), but they also sell pitchers which is great if you’re there with a few friends. Also if you happen to like Russian River’s Pliny the Elder – Cato’s is one of the few places in the East Bay that regularly carries it on tap.

Heinold’s is probably my favorite place to drink in all of Oakland primarily due to it’s history (first opened in 1883), ocean setting, and for being super dog friendly. What keeps it so low on my list is the very tiny tap list. If you saw the bar, you’d understand – the interior is about the size of a studio apartment. Luckily, of the beers that they do carry, at least 2-3 of them are brewed within a 10 mile radius. Do not pass this place up.

I used to frequent this place a lot, but then I got kicked out 1 AM one time for being “sassy”. Nevertheless, this place has really amazing food (get any of the burgers) and a good selection of cheap beer. The proximity to Uptown makes it a perfect hangout spot on a Friday afternoon.

The Trappist is globally known for it’s incredible selection of 25 rotating brews on tap and a bottle list of more than 100 Belgium and European-style beers. You’re probably wondering why this legendary establishment is so low on my list. It has nothing to do with them or their service. Honestly, I just don’t find myself craving Belgium beers that much. I wish I did, but I’m just not there yet.

As far as late night hangout spots go in Oakland, there aren’t that many. Downtown Oakland is basically a ghost town after midnight. Fortunately, there is one shining beacon of light: Hi-Life. Not only are they open every night until 2AM, but they have some of my favorite pizza in all of Oakland (sorry Arizmendi). When Hi-Life isn’t slinging Duck Bacon pizza by the slice, they’re pouring plenty of local beers on tap for tipsy night owls (like myself) who decide they need one more round before heading home. If you need more convincing, they also have dozens of retro arcade games to play with and usually project old Kung-Fu movies on the wall. In short, this place is the tits.

The Hog’s Apothecary embodies everything that is the American gastropub. Not only do they have 32 West Coast beers on tap, but they create all of their sausages in-house (!) along with a huge variety of roasted meats, pickled vegetables and grilled entrees. Oh, you’ll want to try their massive pretzel too.

Located on the Oakland Marina, this Bavarian bier garden and boathaus is home to some of the most authentic sausages and schnitzel in the entire Bay Area (I even took my German friend here and he approved). What makes this place so special is their immaculate attention to detail. All their beer is served in the correct glasses (Gläser – very important) and at the right temperature. Like Hog’s Apothecary, Brotzeit makes all of their wurst and pickles in-house so you know it’s money. All of these factors combine to make it my favorite spot to day drink at. PS: You can even order a “Das Boot” here if you feel like throwing your day away.

One of Oakland’s most well known breweries, Linden Street excels in it’s simplicity. If you’re looking for pineapple infused wheat beers, you might want to look elsewhere. Linden Street takes it’s influences from mostly from English session beers – some notable highlights include Ol’ Brick Bitter, California Common Lager, and my personal favorite: New Oakland Glow Bohemian Pilsner (also featured on my 10 California Beers You Need To Drink This Summer list). If you’re lucky, you might even catch Ippo Ramen‘s pop-up stand on Saturdays- which is a treat all in and of itself. 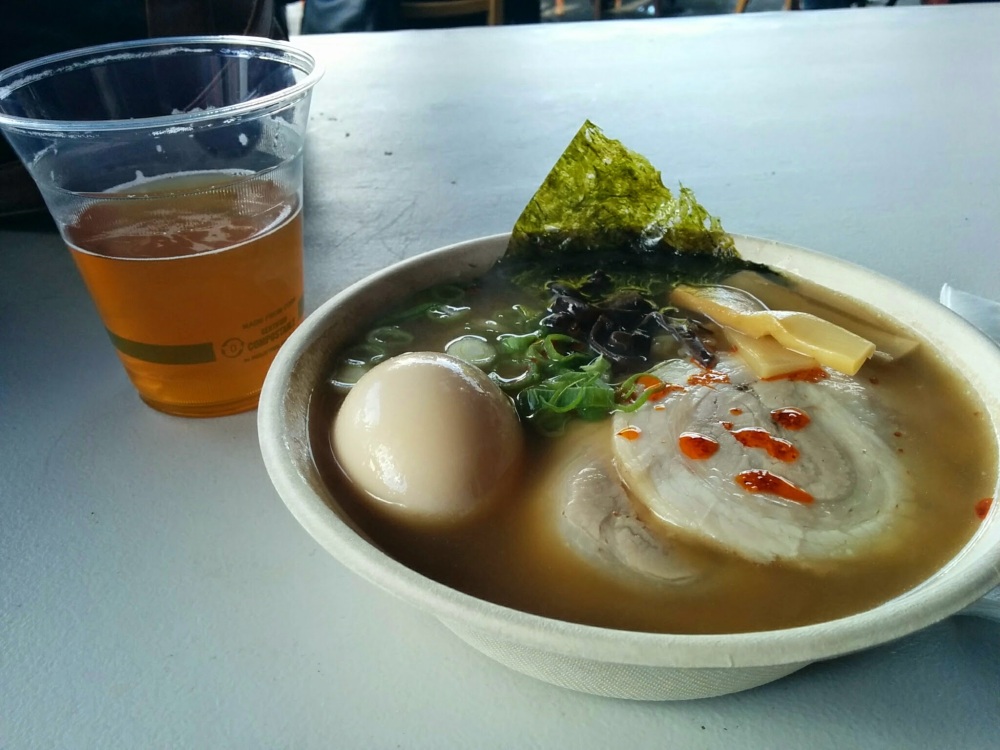 While this might be the newest establishment on this list, it ranks in my Top 10 because honestly I just love Drakes. Plus, their new Oakland location is nothing to scoff at either. Recently renovated from an old car dealership, Drake’s Dealership offers 32 of their year-round and specialty beers (even their San Leandro exclusive ones) and seating for up to 350 people! If you’re in partying in Uptown, this is the perfect place to grab some wood-fired pizza and a cold one before heading out.

Having a beer or two at @drakesbeer's newest beer garden #DrakesDealership!

Portal’s proximity to Lake Merrit makes it a no-brainer for day drinkers to unwind and enjoy one of their 15 California beers on tap. If you’re feeling slightly adventurous, definitely ask for one of their soju (korean liquor) cocktails – you won’t be disappointed.

Lost & Found, home to one of the largest beer gardens in all of Oakland, is built around having a good time. If having 20+ thirst quenching beers on tap doesn’t do it for you, they have arguably the best place in the East Bay to play games of cornhole, ping-pong, and everyone’s favorite: where did my friends go? Plus their menu of bar snacks aren’t too shabby either (hello thai curry popcorn)!

Almost as new as Drake’s Dealership, Mad Oak (named for being located between Madison & Oak) sets itself apart from the crowded beer garden scene by having a sweet electronic dart lounge (cooler than it sounds) and massive outdoor roof deck. Their draft and canned beer selection is pretty incredible too – but be prepared to wait a while to get served on the weekends.

Woods is not your typical brewery. Not by a long shot. They revel in freak beer experiments and I fucking love it. For example, they attempted to answer age old the question: what if we converted classic cocktails (like the Greyhound or Old Fashioned) into a beer? What would that taste like? As it turns out, pretty great actually. Swing by and order a flight – and don’t forget to get an El Porteño empanada.

One of my favorite places to drag my girlfriend to on the latenight, Diving Dog has everything a hop head could want. Not only do they have 30 unique beers on tap to enjoy, but you can even brew your own beer there. For real. Check it out here. 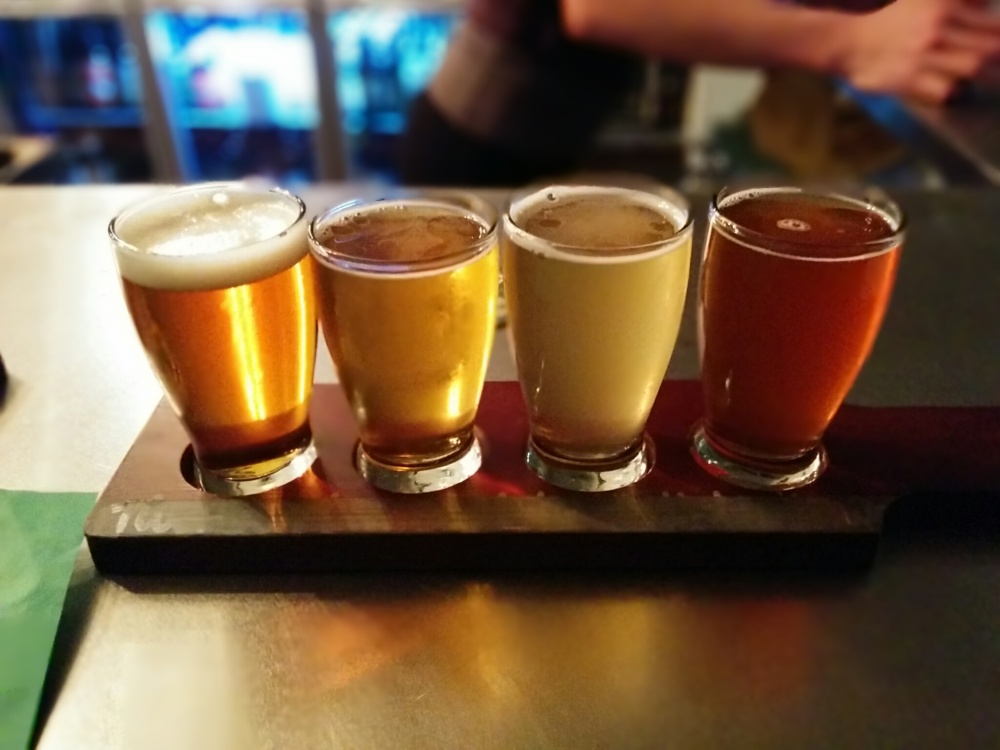 Don’t get it twisted – Good Hop Bottleshop is a craft beer store first, and a beer bar second. At any time they carry roughly 600 bottled and canned craft beers from all corners of the world. There is literally something for everyone here. If you see a bottle you like, you can take it go OR even crack it open right there on the spot. You’ll be happy to know Good Hop is also really tight with nearby brewers and frequently host a ton of tap takeovers which is always a good time.

If Good Hop is a craft beer shop first and beer bar second, Beer Rev is the exact opposite. Beer Rev is a no-nonsense beer bar in every sense of the word. It houses 50 constantly rotating taps of adventurous and wonderful beers from all over the US and beyond. Make sure to check out their to-go section too, they have hundreds of different brews to choose from – yes, even Pliny the Elder.

What did I miss? What’s your favorite beer bar?! Follow me and let me know on Twitter, Facebook or Instagram! You can also tag me using #TheDayDrinker. Don’t forget to check out my previous beer blog posts below!

10 California Beers You Need To Drink This Summer

7 Session IPAs You Should Be Drinking Right Now

Every Beer In My Fridge, Ranked

26 thoughts on “Every Beer Bar In Oakland, Ranked.”